I won't be around but be sure to hit up the local comics shops for Free Comic Book Day! Kingdom Comics in Vestavia always is great for throwing down on FCBD and I've heard that AstroBrain in Pelham may have local artists (give 'em a yell if you want to participate) and stuff. Oh, and FREE COMICS!!!

As for me, I'll be in Greensboro, NC doing free sketches and signing Hero Happy Hours as well as this that night:

So, if you're up to driving to Greensboro, a great time will be had!
Posted by fason is a dork. at 6:33 AM 2 comments:

[Hey, all. I just got this invitation from fellow SHC Brian Ratigan:]

This Saturday Night (4/18) @ 8pm you are all invited to the Spring Meltdown Art Show at Greencup Books. There will be animated video projection by Burke Miles, Kris Daw, and yours truly, as well as sculpture, painting, and live music. BYOB, or there will be beer for donation (give what you can, as it's a nonprofit bookshop). 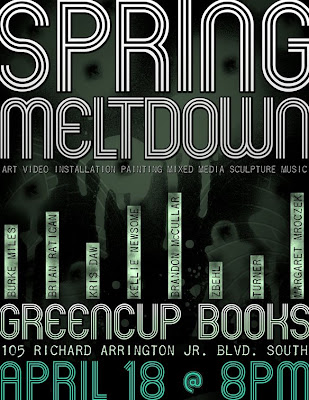 Witness the spectacle! Bask in the glow of inspiration! Berate your nonattendance friends! Come out & support your friends. Hope to see you there.

[Note that there will also be work by SHC Brandon McCullar.]
Posted by Chris_Garrison at 1:34 PM 2 comments:

Look, y'all, at our newest member: Sam McDavid. You may know him as one of the Flying McDavid Brothers, creators of many hilarious, well-loved, animated shorts, done for the Sidewalk Scramble. There are 3 cartoons in Sam's SHC post, and here's another'n:


SHC Chris Rosko has a hand in making some of the Flying McDavid Bros. cartoons, as well.
Posted by Chris_Garrison at 12:37 PM No comments:

[as seen on my deviantart and facebook pages - this is a show we should really get behind and support. there is definitely a 2010 imagicon in the works and i think there's a very good shot at having a "cartooneestas island" or "alley" next year at a reasonable price per cartooneesta if enough of us are interested]

Okay, Imagicon is over and done with but things look promising for Version 2 in 2010... To start, a tiny bit of history... Last year, Birmingham hosted an event called Omegacon. While successful in terms of buzz and volume, Omegacon was a colossal flop in terms of general organization and management. In fact, if not for Omegacon's loyal volunteer base, the con could have easily folded w/in hours of opening to the public. Celebrities were mis-managed, funds were not used intelligently, and chaos was the rule of the day. However, those amazingly loyal and hardworking volunteers decided that there had to be a better way to do this. And this year with Imagicon, they did it. While probably not as well attended as Omegacon, Imagicon was a full success in achieving a relaxed and well-organized convention. I had initially intended not to attend this show. However, my friends at Kingdom Comics [http://kingdomcomics.comicnet.net/] (who are a sponsor and most likely future partner to Imagicon) invited me in as a guest. I trust Kingdom, so I figured "why not?" and accepted their invitation...

That out of the way, here's how things went for me. :D

Friday - I missed most of Friday because I decided not to take time off of work. I arrived a bit after 5:00 and set up shop at Kingdom Comics' booth. I did a couple character drawings just to see if anyone would bite. Knowing that Friday wouldn't be a giant sales day, I wandered the con checking out the dealers and looking for friends. I found The Wandering Men [http://www.wanderingmen.com/], who are friends of mine, and sat in in on a "Developing Your Art Style" panel that one of The Wandering men, Brannon Hall was on along with Billy Tackett [http://www.billytackett.com/], Bryan King [http://www.neo-earth.com/], James Hill [http://www.darkdaysartist.deviantart.com/], and Nigel Sade [http://www.nigelsade.com/]. It wasn't a heavily attended panel (a Friday thing) but it was fun to watch and interact with these guys.

Saturday - Emergency Alarm Day. TWICE, the fire alarm / emergency alarm system was activated, resulting in one full exodus of the civic center. Thank you, Idiot-Who-Thought-Smoking-In-The-Bathroom-Would-Be-A-Good-Idea-Lad. Otherwise, Saturday was a very productive day. There was plenty of traffic and I did a good number of commissions and sold copies of "Hero Happy Hour" and raffle tickets (for a set of HHHs). At 6:00, I had a "Selling Your Soul To Satan is Easier than Breaking into Comics" panel with the aforementioned Bryan King and James Hill as well as Sarah White [http://www.shira-chan.deviantart.com/], Jamie Cottle [http://www.comicspace.com/jamie_cottle/] (I'm sure there's a better site for Jamie, but I don't know it), Bobby Nash [http://www.bobbynash.com/], and Sean Taylor [http://taylorverse.com]. It was an extraordinarily fun panel with creators with varying levels of experience in the comics industry. We quite possibly changed the world that day... (sniff)

Sunday - I didn't STOP drawing all day. I even had to skip a contest I was considering entering in lieu of the list of commissions I had lined up. A very good day. And the raffle was fun too. I should have made a big deal out of it and a fool out of myself and had more fun with it but I was soooo tired by then.

Anyways, overall, I had an excellent time of myself and met lots of great people and maybe even made a few new fans of my work. Mucho props and thanks to the organizers, staff, volunteers, and sponsors who made this a very fun and exhausting (in a good way) event. Rawk.
Posted by fason is a dork. at 7:03 PM 1 comment:

I just got this email from SHC Brian Ratigan:
Hello all,
The premiere of my new show FINAL BROADCAST is tonight at 6pm on BrightHouse Networks Channel 04. This half-hour block features electronic music by The Electric Kidneys and the animation of Kris Daw, Jeremy Pate, and yours truly.
If you don't get BrightHouse, we will have videos online soon. Tell your friends and support independent animation!
FINAL BROADCAST :: EVERY Friday at 6pm on BrightHouse Networks Channel 04.
THANKS FOR READING AND TAKE CARE! OF YOURSELVES.
As Always,
brian ratigan
http://vimeo.com/2961083
Posted by Chris_Garrison at 2:02 PM 4 comments: 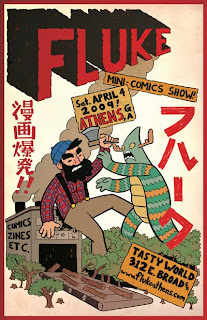