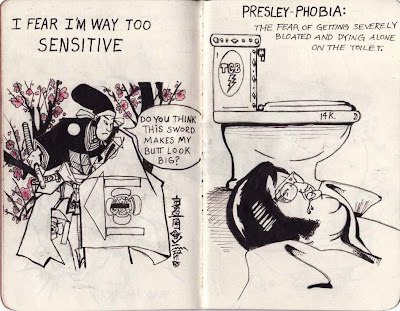 Posted by Chris_Garrison at 2:41 PM No comments:

Chris Fason suggested not long ago (here) that we draw creepy costume versions of ourselves for Halloween. He sent us this disturbing piece, and Aine sent us this fun sketch. I've been a hermit in recent times, so I guess I won't dress up this year. So I don't really have an idea for a response to that challenge. In lieu, I decided to check in on Ptooey and Loogie, to see what they're doing this go 'round:

[For any latecomers, Ptooey and Loogie are characters I invented specifically for Salty 'Ham Jammers to play with (explained in greater detail here). Since then, four of us did a 3-page comic jam about them, called The Secret Sorcerer. And I did 4 other strips about them myself.]

It occurs to me now that I must have a penchant for horse-costume gags, because I just recalled drawing one for a Halloween party invitation some years ago. Checking the files . . . and here it is! 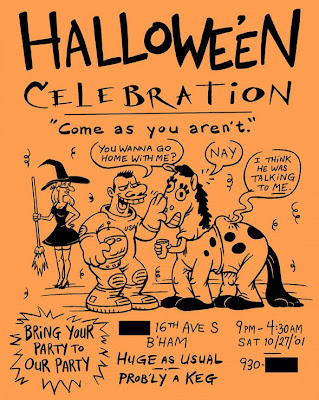 Oh, and Happy Halloween.
Posted by Chris_Garrison at 8:16 PM 1 comment:

Here's yet another new SHC - Deon Wills. You may have seen him in the 24-Hour Comics Day video post of two days ago. 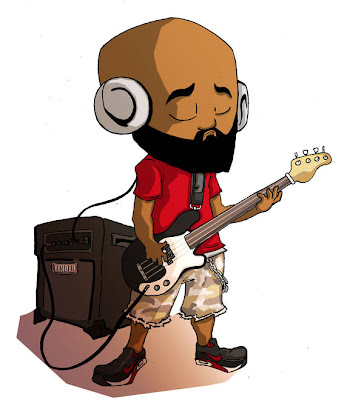 This isn't really typical of his style, so be sure to visit his SHC post and the links you find there.
Posted by Chris_Garrison at 7:48 AM No comments:

Here's a video by Garth of Kingdom Comics, documenting the 24-Hour Comics Day event that was recently held there. It features SHC's Chris Rosko, Sarah White, Derek Anderson, and several other cartoonists I'm hoping to recruit for our Army of the Doodly.

Saturday night, the wife and I visited Greencup Books. That's the cool, non-profit bookstore in Birmingham, next to Bare Hands Gallery. Rock bands were playing upstairs, but I just wanted to see the animation installation. They were playing a 3D puppet, stop-motion animated music video by Brian Ratigan, and another cool piece of After Effects animation by Burke Miles. I mean, they were projecting the movies on a sheet. I don't have Brian or Burke on the SHC roster yet, but maybe soon I can get them on board. Their films were nifty. And there was some cool art by Brandon McCullar, whom I also need to recruit.

The music was played at a typically high rock 'n' roll volume, which I can't blame them for. But the room had brick walls, creating an echo chamber. It was painful, really, and I could tell that I was suffering permanent hearing loss. I'm sure it will effect my quality of life, in later years. Most of the listeners were younger, and therefore naturally oblivious to dangers of all kinds. Including acoustical.

This might also be of interest to y'all: Greencup Books has a pretty good little comic book section. I think they're all used comics, and the selection is COMPLETELY random. But the nice thing is that, among the usual super-hero fare, a certain amount of the artier and/or funnier stuff can be found. The kinds you don't usually see much of, at our other area stores.

But I should mention, I expect to see all kinds of not-so-super-heroic comic books at Marcus Lusk's new store, Atomic Comics, in Gadsden. Rumor is that it will be opening pretty dern soon! I for one can't wait. And apparently a store called Astrobrain Comics is supposed to be opening in Pelham. I don't know what kinds of stuff to expect there.
Posted by Chris_Garrison at 9:29 PM No comments:

Remember, you asked for it. 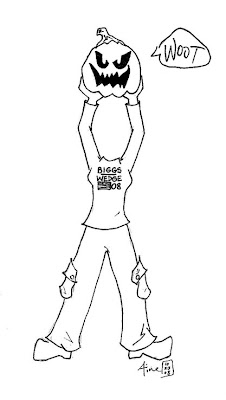 New Kids on the Block

We've got 2 more new artists on board!

Check out Chris Rosko. He's done the regular strips Haikuuties and Cartoon by: Rosko for Birmingham Weekly. He hasn't written any text for his SHC post yet, but take a gander anyway.

[editor's note: Rosko has since added text to his post]

Next, cast your eyes on young Derek Anderson. I met him at Kingdom Comics, during 24-hour Comics Day. 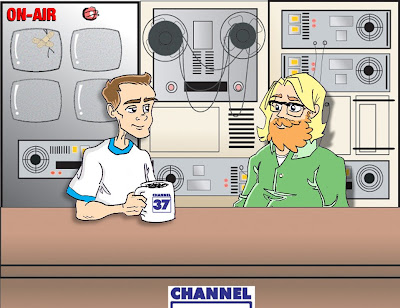 Posted by Chris_Garrison at 8:58 AM No comments: 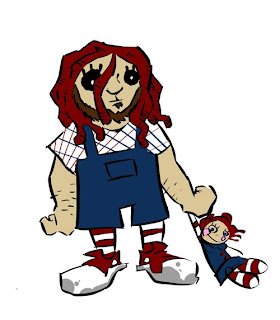 okay, yeah, i'm still alive. for the past month or more, i and my family have been dealing w/ the sale and purchase of homes. it's been slow and frustrating. after setting and re-setting 4 closing dates we finally closed on the sale of our home last thursday and with moving and living out of a u-haul, it just wasn't in the cards to break away for 24-hours for the 24-hour comics day. as things sit, we're scheduled to close on the new house on thursday (we were originally supposed to close today. bleh.)

art-wise, other than the day job, i haven't really done any art lately, definitely no cartooning.

i only have internet at work so i'm sorry it seems i've been hiding under a rock. it's not intentional, just... life.

how about a simple art challenge for halloween? draw and post something creepy or halloween-y? i'll try and get something up today or tomorrow. ooh! draw yourself as you envision yourself as a creepy halloween character.

Hey, I'm on YouTube! (Warning: This stuff is kind of PG.)

Here's some stop-motion puppet animation I did as a student, in 1993:

And you can see more of that on the YouTube channel that my buddy John Walker and I put up: YouTube.com/Miltonicity 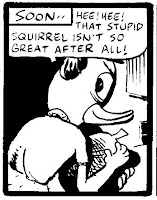 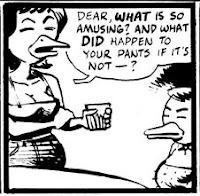 Chris Fason was NOT THERE! I guess his plan to participate this year didn't work out.

Rosko was on his 7th page, in the 7th hour. If he continues at that rate, maybe he'll finish just in time for the noon deadline.

Sarah White had already finished penciling her 24 pages, and was already inking her 11th! At her current speed, I guess she'll have a 24 page comic in 10 hours, instead of 24 hours. She was mainlining Mountain Dews and Pepperidge Farms, so it's no wonder.

There were maybe 7 other artists there, mostly youngsters who I didn't know. I tried to politely spread some SHC propaganda around.

Rosko and Sarah were both gone, but I heard that they both finished their 24 pages. Congratulations, y'all!

Two other artists were still there, just finishing up, and I think one other person might have finished as well. So it sounds like there were 4 or 5 completed 24-hour comics created at Kingdom Comics this year. Pretty awesome. Hopefully some of these will get posted somewhere so we can see them.
Posted by Chris_Garrison at 1:53 PM 1 comment:

Today is 24-hour comics day! I decided not to try it this year, but Fason and Sarah and Rosko are doing it. And I don't know who else might be there. They're down at Kingdom Comics in Vestavia, each trying to write and draw a complete 24-page comic in the span of 24 consecutive hours.

Halloween is a fun art time for me. This year I did some cool cut outs on birch. 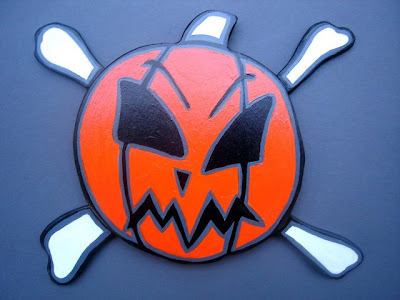 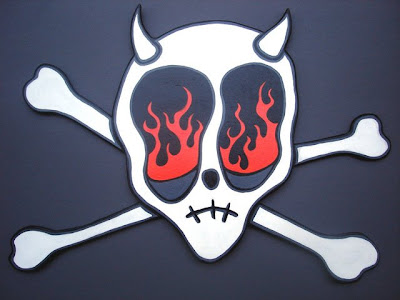 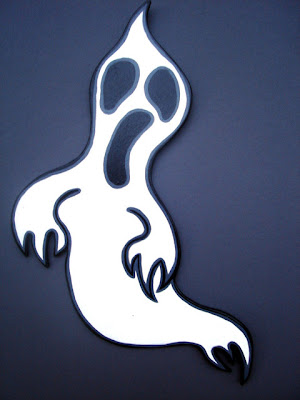 The Salty 'Ham Jam blog is like a ghost town!

For my part, I'm real busy working on animating a TV commercial and a music video, so I don't have much stuff I can post right now. And other folks just ain't hardly utilizing this space! So my plan right now is to start posting every week or so, by just picking out a piece from a different cartooneesta each time and putting it up . . . pieces that aren't already on the SHC page, I mean.

In this way, the Salty 'Ham Jam will at least retain an appearance of life, until which time more cartooneestas start posting here more often. Carry on.
Posted by Chris_Garrison at 9:16 PM No comments:

The Coalition of the Unwilling

I thought everybody might like to learn about a few more cartoonists who live -- like extra-terrestrials -- secretly in our midst! It turns out that Alabama's lush, kudzu-laden hills and hollers are chock-full of them.

I call this the Coalition of the Unwilling, because these are the ones who, for whatever reason, have yet to join the Salty 'Ham Cartooneestas' roster. But a lot of them are very talented, so let's take a look at their wares:

Yet again, I've attempted to make something out of nothing by scanning and posting a bunch of drawings out of my old sketchbooks. 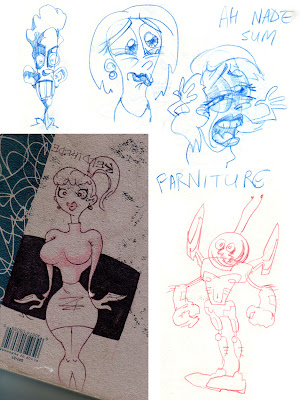 Go to my sketch blog if you want to see more of these sketches from 1996.
Posted by Chris_Garrison at 9:07 AM No comments:

[Here's a post Mark Martin put up here accidentally! He meant to post it on his own blog. I'll just let it stay, so everybody can get a small taste of what things are like over at Mark's blog: jabberous. --Chris G.]

dogboy and eeteed want info on the "September Project"...
It's for a promotional piece for a wonderful bed & breakfast in Wales. I'll post the completed art soon. I like to wait until the object actually exists before unveiling work done for a commercial enterprise.

jed: And unlike the "family recipes" of some candidates: Those delicious Hope Tacos and Barackitas probably aren't borrowed from the food network.
DAMN THAT McCAIN AND HIS FAKE RECIPES!!!

h-man: I can't watch THE SIMPSONS anymore.
WE KNOW WE KNOW!!! Look, last Sunday's episode was pretty lame, but even a lame Simpsons is better than the best Family Guy or American Dad ever produced. You can argue with me if you want to, but benny and bonzogal will just shout you down.

Why would you start a second blog?
Because I need that Hope Taco recipe!!!

Whyhowcome thay has never been a Gnatrat movie? Or has they bin an I just ain't never heard of it?
Yeah right!

benny: why do you only get 500 px for your stuff?
The 500 pixels I mentioned is the max width of the EveryThing "frame" on paneltopanel.net. It is what it is because that's the way the webmaster made it.

Speaking of p-to-p, anybody who slacked off and missed Runaway Comic can get all 3 issues for $5.95 there now. Christmas is coming!!!
... 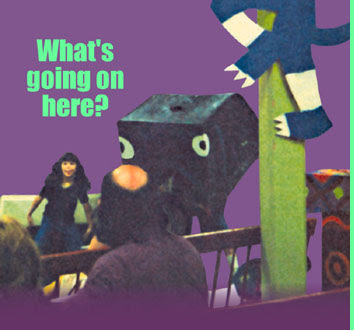 See the girl in the blue pants with long black hair? She's playing Jonah and that's me in the whale costume from my production of "Jonah and the Whale" from way back in the year 2000.

I ran into her dad recently (the balding guy in the foreground. He told me she has blossomed into quite the artist, so I checked out her online gallery and I have say that is an understatement. Not bad for a 16 year old prodigy. I yam so proud of her!!!
...

DON'T RUN AWAY!
It's politics but it's FUN!!!
Obama As My Personal Jesus!
Princess Sparkle Pony's Photo Blog!