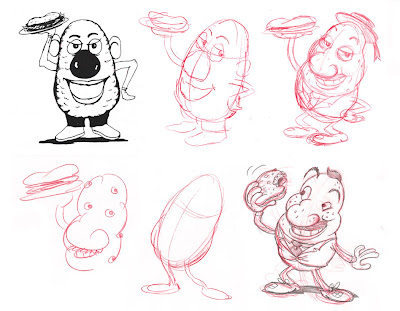 OMG! i wish i was there. I was at Al's last night and I've always thought that character looked kind of like it was in drag, the potato dimple arrangement resembling a five o'clock shadow. It seemed an unsavory and troublesome creature and i wouldn't want it handling my food.

In my final version there, I've got him in a suit, because I was picturing him as a restaurant owner. But it just occurred to me that he might have looked better in a T-shirt and apron.

yeah in the suit he looks like a silent movie villain. The Hamburglarist.