Hey-o, Kermit the Frog here! (No, no, no... it's just Fason. Happy Birthday to Jim Henson today!) If you're on my Facebook, you may already know that HERO HAPPY HOUR, a comic that I co-created w/ writer Dan Taylor has been reborn as a webcomic. The first storyline, "Cease & Desist", is drawn by Grant Perkins and I will be taking over regular art chores after Grant's run is complete. In the meantime, Dan and I have created a couple new anti-heroes for First City that also hang around at the Hideout Bar and wax philosophical about being heroes. This will be a supplemental comic to the main HHH webcomic. I'm not sure when it will begin to run, but it will run on days that HHH does not (currently HHH updates Tuesdays and Thursdays). Anyways, here's a sneak peek at Double Shot and Chaser, our new mercenary and bounty hunter anti-heroes: 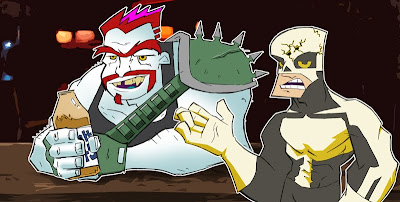 Be sure to check out herohappyhour.com regularly for comics and other shenanigans.
Posted by fason is a dork. at 8:21 AM

Double Shot and Chaser, that's funny.. Can you break down how their designs relate to their names though? Are those bullet holes in one's head? Maybe some of those "character profiles" like Marvel would sometimes do where they give a full figure drawing plus stats, could be a possible site feature? I'd pay you Oreos and NutterButters to see that (if Chris brings them to the J!)
-Tim

I'm actually working on full-body shots of everyone to add to the site a la The Marvel Universe Handbook style.

The names are more bar themed than anything since all HHH stuff happens at the Hideout Bar.

Double Shot is supposed to be a Deadpool type assassin / mercenary for hire... and yes, those are "double shot" bullet holes in the costume. Chaser is an intergalactic bounty hunter a la Lobo. I wanted these guys to be visually reminiscent of who they're based on, DS being and more dead-looking version of Deadpool and Chaser being a mix of Lobo and the Comedian from Watchmen.

I'll try and post more as I finish the full-body shots for the site.

The Marvel Universe Handbook, that's exactly what I was talking about. I remember I had one giant-sized issue, I think it was all dead heroes or villains though.. So it might've run the gamut from A to Z. Or at least A to M. But among living chars., you'd get like T through Z and have page after page of Zortans, Zorbas, Zetarangs.

That tells me a lot now that I see who they're based on. The Lobo influence I subliminally picked up on, but I could not have guessed Deadpool. I hate to admit it but I also didn't make the "double shot" connection to the bullet holes---but I'm not a good test audience, b/c puns and things usually hit me with a long delay, if at all. I think though I had the impression from those other cracks that he might be riddled with bullet holes, so the "double" part escaped me.

I'm somewhat out of the current comics, but just browsing the racks (comic book racks) I have noticed Deadpool's apparently immense popularity. I think I get it-- he's this irreverent, amoral(?) assassin(?) with a sort of Spiderman derived costume, I take it. I can see the appeal of that.

Please link to the char. profiles when they're up.
Thanks,
Tim