I got together the other day with our fellow SHC Chris Rosko for another 2-man comic jam. We met at Barnes and Noble, and here's the goofy thing that came out of it: 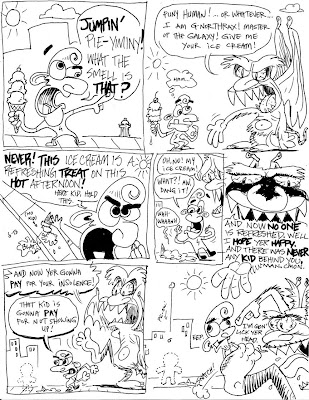 Rosko drew panels 1, 3, 5, 7, & 9; and I drew the rest. Except, we collaborated on the last panel. As we were wrapping up, we starting talking about what was going to happen and trying to agree on an ending. Is that allowed? I don't know. If that's how it's supposed to work, shouldn't we have done that from the start?

Anyway, we agreed on how to end it and that we should collaborate on the last panel. So I drew G-Northrax and the cherry in the last panel, and Rosko drew the final Lieutenat Colonel Electron.

...but when I clicked the empty space, it magically appeared!