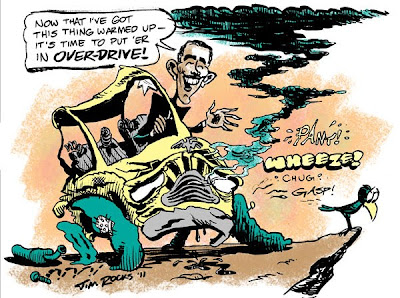 Ha ha! When he said something to that effect the other day, I was indeed struck with the notion that some folks wouldn't like it. This perfectly illustrates their POV.

I love the exposed springs in the seats! Nice charcoal texture, too.

Well yeah, it seems a little out of sync with the reality.. I mean yes Wall Street has been profitable, but there are still many, many things that portend poorly for the average person.

Just seemed a bit disconnected when so many people are on food stamps, unemployed (I've heard something like 22% is the real number) or homeless.

At the same time, I totally understand his changing his message, because -- for SO long, he's been diminishing his accomplishments by trying to sound understanding. As in, "We're doing a lot of good stuff, but that's not much comfort to a person who can't find a job." At some point, he's got to start tooting his own horn (to continue with the car analogy). When things start getting better, Obama doesn't need to be the last one to admit it.

So.. I'm curious how you would draw the cartoon.. He'd be in a sports car or something...?

I wouldn't change a thing! ... I guess I kind of switched topics.

I'm trying to envision the cartoon that would illustrate the point I was making. Um ... Okay, there are three guys in front of a TV, and they're labeled "Democratic Strategists." On the TV, Barack is saying, "We've come a long way with helping the economy. But until everyone in America has a job, it's not good enough." So the three guys are shouting at the TV, "Oh, come ON! Are you even TRYING?!", and "It's called sugar-coating! Look into it!" The third guy looks exasperated, hands over his eyes, and is adding, "Honesty is NOT the best policy."

Lazy Sunday today for me, this is fun.

I think maybe your Democratic strategists are basically just stand-ins for you.. which sort of cracks me up, that your frustration doesn't slow down to be translated into some goofy parallel.. but I'm not sure that's kosher in the rules of editorial cartooning.. with the usual big visual metaphors and all.

If it stayed with cars, maybe you'd have Obama in a terrific sports car, but being very humble about it and playing it down so much that the Ladies he's talking to are ignoring him and flirting with some Republican, who's driving like a War Machine Hummer, and chortling and bragging about it... Or would the Republican be driving a clunker, I'm not sure.

Perhaps editorial-cartoon-style isn't the best vehicle for such a minor complaint. No pun intended.