I feel bad for not posting anything...

So, here's some Hero Happy Hour throwaway stuff; it's also my first attempt at completely 100% digital comic creation w/ the Cintiq (12", not the awesome 21" that Mr. Garrison has). 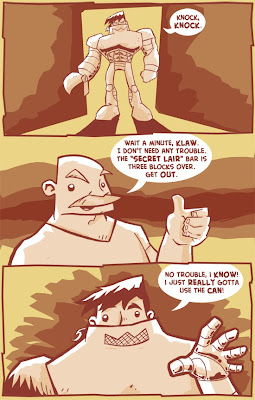 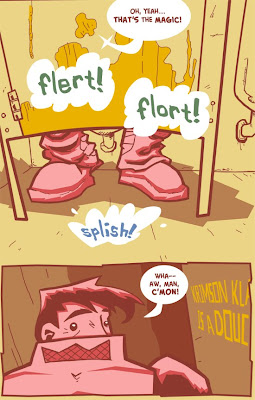 Very impressive. i am continually amazed by folks who can do these things completely digitally. What program are you folks drawing in? I have a lil' wacom tablet that is about 10" or so across. I use it for coloring but not much else. Any tips u can spare would be greatly appreciated.
- Derek

I've been using Photoshop. I tried playing around with Illustrator but couldn't quite get what I was looking for; the lines were smoother but lost that "chunkiness" I'm fond of. I've got a little Wacom tablet as well but could never get comfortable with the weird disconnect of drawing on the desk and the lines showing up somewhere else other than beneath the pen nib. I don't really have any tips... Just keep practicing like the rest of us. :P

Fason, this stuff is great! I imagine Krimson Klaw has ENOUGH heartache in the bathroom, without having to read disparaging graffiti about himself.

It's awesome that you got the Cintiq. You and I are the only two members of the Alabama Cintiq club, as far as I know.

For inking in Illustrator, I suggest watching the inking tutorials on Sherm Cohen's blog. He goes through inking SpongeBob in complete detail, and it's great. Be sure to read the comments, too, because he learns a thing or two from his readers.

I plan to try MangaStudio for digital inking next, because it seems like everyone likes it a lot. And there's apparently a $20 version!

Derek -- We know that it IS possible, after enough practice, to make a breakthrough, after which one is able to draw well with a regular Wacom tablet. After all, Frank Cummings draws Blondie that way, and I can't imagine anything that requires more precision than that.

I think our fellow SHC James Hislope has been doing some great stuff with a Wacom and Manga Studio.

Of course if you can manage to get a Cintiq, you don't have to make that breakthrough. Drawing right on the screen is a joy, for sure.

Here's a link to those Sherm Cohen inking tutorials, in 11 parts: http://cartoonsnap.blogspot.com/2009/10/adobe-illustrator-cartoon-inking.html

As I say, remember to read the comments, because one person gives him a trick to erasing that works well. Before that, he was inking in Illustrator then fixing up the details in PhotoShop. This could save that whole step.