The first Salty 'Ham Slam was well attended and pretty darn fun! To those who missed it, we wish you coulda been there. Hopefully we'll see you next time.

We just talked and showed each other some various cartoony (and not-so-cartoony) pieces of work. I just sat back and let it be free of organization. Hopefully everyone introduced themselves well enough, but if you didn't quite figure out who you were talking to, click the names above and perhaps it will become clear. Next time, I'll start imposing a little more structure. But we should also set aside a portion of time for just schmoozing.

I heard people talking about their favorite cartoonists and discussing the tools of the trade. They talked about software, and Kirk showed us ToonBoom on his computer. I'm sure I missed a lot of interesting things, while I was listening to other interesting things. We spoke briefly about borrowing the policies of secret societies, and thought about whether to come up with a secret handshake and get rings. We also heard from Sam on some of his favorite bits of Ted Knight trivia. Everyone agreed that it was fun, and that next time we should also be doing comic jams and exquisite corpses, etc.

I have to say, it was cool to witness the founding of an actual gang of chums, from what started as a modest and merely virtual list. Thanks for coming! I'm already thinking about when to schedule another big meet-up.

. . .
I just got some photos from the event, as taken by Hal Jones! Sadly, since he took them all, he's not IN any of them, so I'll just have to describe him. He has a round head and large, beautiful eyes. 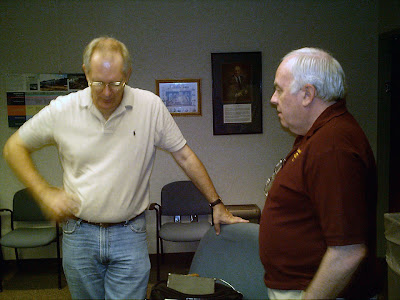 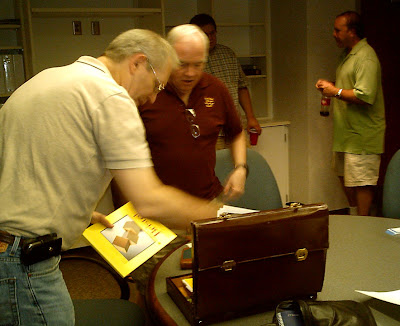 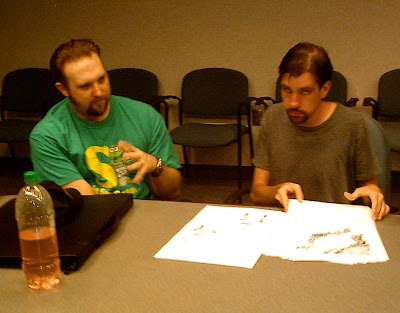 left to right: Shaun Burnett and Tim Rocks. Shaun, it looks like you brought some art that I didn't even get to look at! Next time, we'll put all our stuff around the wall and on the table, then we'll all walk around and peruse our own little gallery show, so we don't miss stuff . . . Tim, you look hilariously surly! I know Tim, and I promise he's a nice guy. Check out his left (our right) hand. It's a quintessential cartoon hand, right out of a Mickey Mouse cartoon! His thumb is a perfect silhouette, with the classic jutting knuckle. And his pinky is sticking out a bit more than the other fingers, to avoid monotony! 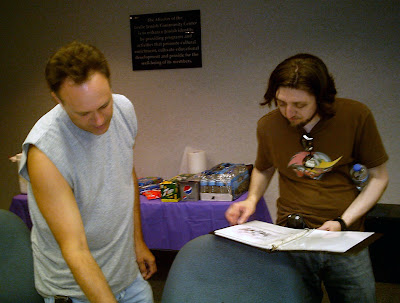 Stephen Smith and me, Chris Garrison. And the snacks. 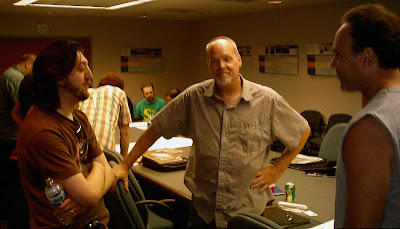 If only we had a bigger table. 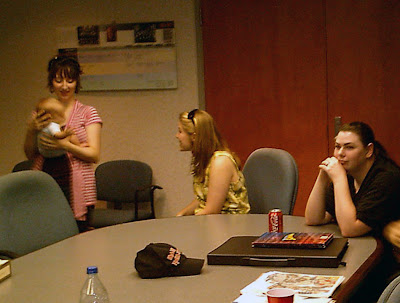 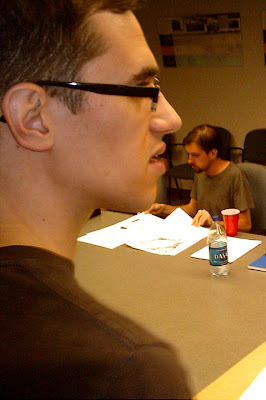 Jamison Harper and Tim Rocks. It looks like an optical illusion wherein Jamie's a giant, but that's no trick photography. He actually has a gargantuan head. 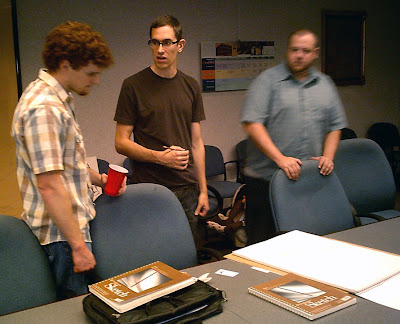 Jamie: Heath, you're just going to have to do better. You're a complete disappointment.
Heath McPherson: *sigh* I'm sorry.
Chris Fason: I feel so . . . unfocused.
Posted by Chris_Garrison at 9:03 AM

I really like the review I just got in an email from Kirk Creel:

>> I hope we can do the slam again soon. It has motivated me to get my pen moving.

it was definitely a good time. i look forward to the next meeting. with some actual producing of art (and nametags) :P
i've started thinking of designs for our rings.

sigh... Our little group here in Western Mass is PROBABLY going to have our last get-together in August. The gal who does all of the organizing is moving away, and I doubt if anybody else will take over. I sure as hell won't - it's a thankless job! I don't know how you do it, Chris!
Sorry I missed you and Cousin Kirky - and Hal's beautiful eyes!

It's not all that thankless; I've received a whole bunch of thankses, actually!

I'm going to make it out to one of these SOMEDAY!