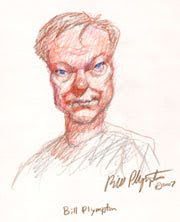 The Sidewalk Moving Picture Festival and the University of Alabama at Birmingham's, Jane Beck Film Club and Jemison Lecture Series are proud to announce that world renowned illustrator and animator, Bill Plympton will lead a master class Friday, September 25 to kick off the 11th Annual Sidewalk Moving Picture Festival. Mr. Plympton's animated feature, Idiots and Angels will have its Alabama premiere Sunday, September 27 at 1:30pm at the Alabama Power Auditorium.

The master class will be held FRIDAY, SEPTEMBER 25 at 3:00 pm at Heritage Hall in room 102, on the UAB campus at 1401 University Boulevard. The event is FREE and open to the general public with reserved seating for UAB students with valid student ID. EVERYONE who attends will receive a FREE Bill Plympton drawing.

"We are thrilled to have Mr. Plympton in Birmingham as a part of Sidewalk and are so pleased that UAB could partner with us to make this once in a lifetime opportunity a reality for the community," says Sidewalk Executive Director, Chloe Collins.

Mr. Plympton spent 15 years as an illustrator with his work gracing the pages of The New York Times, Vogue, House Beautiful, The Village Voice, Screw, and Vanity Fair. His cartoons have appeared in such magazines as Viva, Penthouse, Rolling Stone, National Lampoon, and Glamour. Moving from illustration to animation, Mr. Plympton has created 5 animated features, 33 animated shorts and 3 live action features. Two of Bill's animated short films, Your Face and Guard Dog have received Academy Award Nominations. The Tune, his first feature length animation, featured over 30,000 cels, all hand drawn by Mr. Plympton. As a means to finance The Tune, Mr. Plympton released several selections from the film as shorts. One of which, Push Comes to Shove, won the Prix du Jury at the Cannes Film Festival in 1991. Beyond newspapers, magazines and film, his work is also known from MTV's popular mid-1990's show, Liquid Television.

To enroll in this FREE Master Class, click below.

GET TICKETS
Posted by Chris_Garrison at 11:56 AM