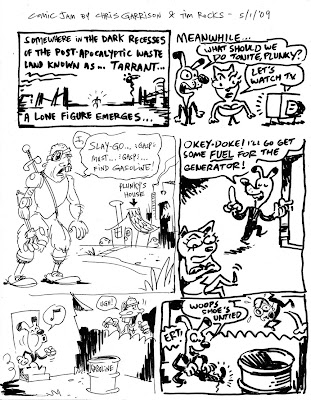 Goofy, but fun. Here's what happent:
On Friday afternoon, I invited Tim Rocks to join me at Barnes & Noble to try a spontaneous, 2-man comic jam. Over chocolate chip cookies, we agreed on a few rules. We decided that you can make your panel as big or as small as you like, and that you can suddenly decide that yours is the last panel of the story at any time. You can try to conform with the other guy's drawing style and story ideas, or you can throw them out the window, if you want.
I brought some pencils, and Tim brought a nice fat marker that he wanted to use. I thought the marker, although fun, was too fat to draw the small details I wanted to put in. So I alternated between the marker and a regular black pen I happened to have.
I drew the first panel, based on my experience of that morning, having visited Tarrant. We alternated panels of course, so I drew panels 1, 3, 5, and 7; Tim drew panels 2, 4, 6, and 8. I had anticipated that Slay-go would probably decapitate the little dog, or cut him in two, after which Plunky might appear and exact her revenge. But Tim subverted the violence in panel 6, and again in panel 8. At that point, I had a hard time figuring out what we might do next. I suggested that panel 8 actually kind of worked as a kooky ending, and Tim agreed, adding "The End!" at the bottom. So that's why the story comes to a rather abrupt stop.
Nevertheless, I quite enjoyed working on it, and I think it's a fun read, and that it was worth doing. I think having two artists, instead of a whole bunch, probably helps the story stay at least a little bit more focused, as opposed to comic jams with more people, in which the stories are often all over the place. Hopefully I can organize more fun jams like this one in the future.
Posted by Chris_Garrison at 11:12 AM

Throw another one soon dude. Im there.