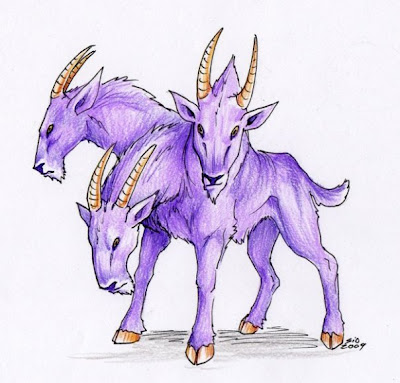 Nice, Sio! ... But you provided no explanation. What's up with this guy?

Here's my guess: We all know Hades has a three-headed dog guarding his gates. But it turns out he has a whole menagerie of three-headed animals. To Hades, this is just a run-of-the-mill ram.

Incidentally, my great-grandfather was killed by a goat. My dad says it was careless of him to turn his back on the animal, because "it was a known butter." So be mindful around goats, or you might end up like William Martin Garrison.
Posted by Chris_Garrison at 10:35 AM

>> The whole three-headed purpleness actually came from my psychology teacher here at school...tho I can't remember exactly what he said... I just knew the beast had to be drawn XD