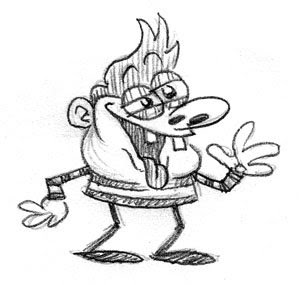 Love Always,
G
Posted by Chris_Garrison at 10:51 AM

Great stuff! Very ur-cartooning,, it has, to me, that sort of 20-30s classic cartoon feel.

I think "Gooey" would be the obvious choice, to complete the "ooey" trifecta.. but maybe it should contrast?

The keys strip I'll admit puzzled me until I read your explanation. But not puzzling in a bad way-- I've seen surreal strips of course, but somehow that's a different take on the slip into the surreal.

I'd name the friend Oyster.

The drawing, pacing, staging, expressions of the strips are great, in my humble opinion. The "looker" strip is my fave. The key strip doesn't work for me, even in a twilight zone way. But that's me - it could be somebody else's fave!

Buddy McNutty #2, the never-ending project that would never end - - HAS ENDED!!! It is done!

Now I have a massive fold-out Christmas card to do for a Welsh B&B by the end of September. So here we go again. But I'll try to hock A Loogie in there somewhere...

Oyster's a good one. I'll continue taking suggestions or votes, if any more come in.

> The drawing, pacing, staging, expressions of the strips are great, in my humble opinion.

The thing with the keys is supposed to be that, instead of Loogie leaving the keys in her coat pocket or letting them fall between the couch cushions like normal people, she somehow accidentally left them in EVERY SINGLE CUBIC INCH OF THE ENTIRE UNIVERSE. It's hard to get that idea across, and then if it does get across, it's probably not actually funny. I think maybe quantum physicists would laugh at it. Does anybody know one?

I think Wexler....just looks like a Wexler to me.